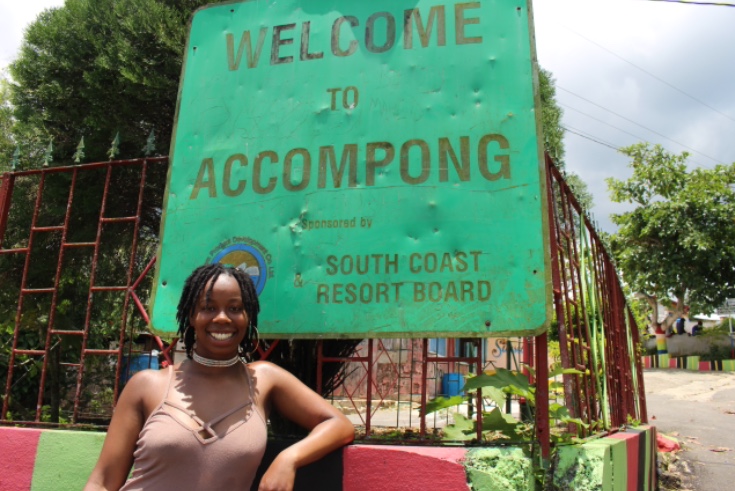 “You are from Ghana? Our people came from there”, the old man said to me. I sat on the ground, next to him and a group of young men sitting in a circle, smiled and said, “I came looking for you all.”

Ever since I was a young girl, I wondered where my family members had been taken after they were stolen from Africa and dispersed around the world. I watched Roots and wondered: would we ever reconnect?

While doing a research on the African Diaspora recently, I learned about Accompong Town a historical Maroon village in the hills of Jamaica’s St. Elizabeth Parish.  I thought “hmm, Accompong sounds like a place in the Akuapem region of Ghana called Akropong.”

I delved deeper into the history of the Accompong Maroons.

Accompong Town was established in 1739 after nearly 50 years of guerilla war between a few hundred poorly armed resistance fighters and thousands of English soldiers. Captain Cudjoe, the leader of the resistance, encouraged Africans from various tribes to set aside their differences and unite as Kindah – which directly translates to One Family.  With this, they held back their common enemy.  Realizing they would not overpower the Maroons, the English Occupation Army signed a Peace Treaty granting the Maroons sovereignty and 1500 acres of land.

Every year, on January 6th, the Abeng Horn (cow horn) sounds to call the Maroons to assemble – just as it did 300 years ago.  This marks the start of the Annual Accompong Maroon Festival which celebrates the signing of the Peace Treaty and welcomes thousands of Jamaicans and tourists to take part in the festivities ranging from children’s activities to traditional dances, shows and other activities. This year marked the 280th annual Maroon Festival hosted in Accompong.

Realizing Jamaica’s notable African history and the links that eternally bind the seeds of the diaspora together, I longed to see Accompong Town firsthand.

Little did I know, months later, my wish would be fulfilled. We took a scenic two and a half hour ride from Kingston to Accompongtown, the home of the brave Africans who became known as Maroons.

Having fallen asleep on the ride up the winding roads in the mountains of Accompong Town, I woke up amazed at how steep the hills were. It reminded me of the trip to my father’s hometown of Aburi in the Eastern Region of Ghana, West Africa.  It was also very mountainous with scary-steep hills. We drove around and around and up the side of the Jamaican mountain for what seemed like hours until we asked someone, “Is this the way to Accompong Town?”  “Yes” – a gentle man replied eagerly, “Follow me!” 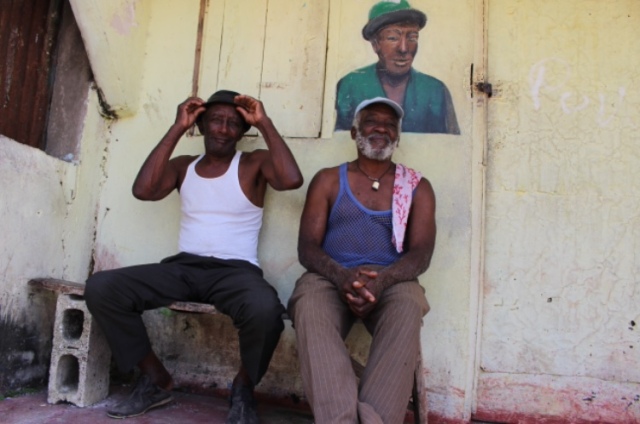 We originally planned to go there for the day but when we arrived the sun was setting fast.  Our new Maroon friends said there was a big party that night so we were happy to stay the night and tour the following day. We stayed in a bedroom of a local homeowner, whose family was more than hospitable, welcoming us as a part of their family.

The aura was serene like Ghana. The people were warm and friendly. I thought about the ancestral warriors who created this home away from home.

During the TransAtlantic slave trade, around 10 to 28 million Africans were taken to the Americas and the Caribbean to be chattel slaves, working for free and living in deplorable conditions. In Jamaica, enslaved Africans were mostly of Akan descent, followed by Yoruba, Fon, Efik and Moko tribes. The Kromantis, an Akan group of Ghana, was the dominant African culture and made a lasting mark on the legacy of Jamaicans and African resistance.

The name ‘Maroon’ comes from the Spanish word ‘cimarrones’ meaning untamed or wild. It is used to describe the Africans who escaped slavery and sought freedom and independence in a time of bondage. From the year 1655, they teamed with the Tainos, who were native to the island, and settled in the mountains to form independent societies from the British.

Africans stolen from country escaped to the mountains and led resistance movements which was led by leaders such as Nanny and Cudjoe, who were both from Ghana.  Queen Nanny who was an Asante born in Ghana, escaped slavery in Jamaica and formed her own community, Nannytown, which was later destroyed by the British. As stated, Cudjoe is noted for bringing together Africans from various tribes and creating a unstoppable, united force.

Because the existence of these free societies challenged British colonial forces who sought to have complete control over the land and continue free slave labor, two wars broke out between the British and the Maroons, the first in 1655 and the second one in 1734. Eventually, they signed and one of the Maroon leaders Cudjoe signed a Peace Treaty March 1, 1739 and, from then to now, the Maroons have remained an independent state. Visiting the town was an unforgettable experience. Connecting with the people there was life changing: I reconnected with family whom I haven’t seen for centuries. I am so excited to continue strengthening relationships that reinforce an international community within the African Diaspora.

On the heels of their 280th successful annual Maroon Festival in Accompong, the Maroons of Accompong Town, Jamaica have recently joined forces with St. Elizabeth native Doneal Brown and American-born Jennifer Bennett to present the first annual Celebrate Africa Festival at Accompong, Jamaica. The event will be held on Saturday, 21 July 2018, from 10:00am to sunrise the following day.

This Celebrate Africa Festival is the third of a series of island-wide African-themed events designed to strengthen the bonds between Jamaicans and Africans from the Diaspora. Amidst the lush green Jamaican landscape, Africans – young and old – from across the globe will come together to drum, dance, sing, play, eat, and drink to celebrate Africa as One Family.